Managing your project's budget and measuring key project performance metrics is what Earned Value Management (or EVM) is all about. It helps you know whether you can truly say "On Time and Under Budget." The basic idea is to compare your costs to your budget in a way that takes into account your project schedule. This is particularly important when you are not going to be spending money at a constant rate. 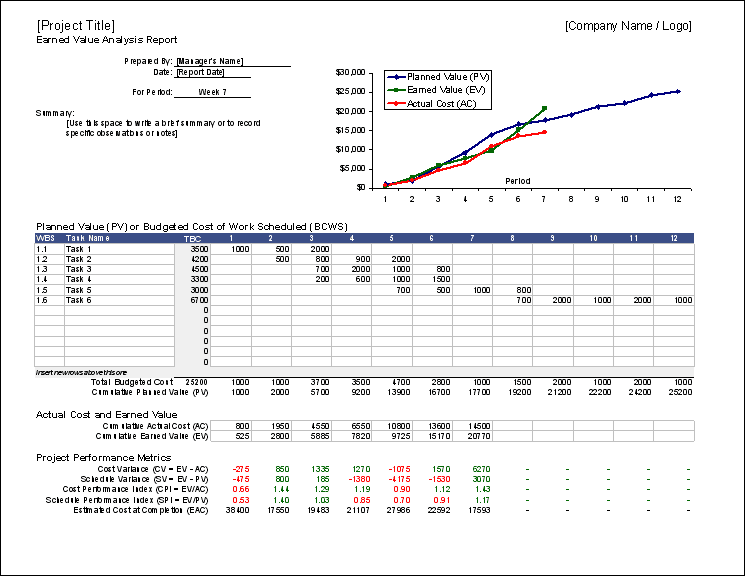 This template demonstrates the use of EVM formulas to run a basic earned value analysis and monitor spending over the life of a project.

Start by adding tasks to the Planned Value table and entering the amounts that will be spent on the tasks each period.

After you are done defining the tasks and the budget, enter the same set of tasks in the EV (Earned Value) and AC (Actual Cost) worksheets.

At the end of each period, you'll enter a percentage complete for each task in the EV worksheet, and the amount spent on each task during the period in the AC worksheet.

If you haven't already defined your project schedule using a Gantt chart, we recommend that you first download Vertex42's Gantt Chart template. The Gantt chart is used to define the project schedule (WBS, Tasks, durations, and task dependencies), while the EVM worksheet is used for planning and tracking your spending.

Alternatively, the project manager might define "Purchasing" as a separate category of tasks, with each large purchase as a sub task and another sub task for miscellaneous purchases. Then, whenever each purchase is made, it is a simple matter of marking the appropriate task as 100% complete.

Keep in mind that just because a task is 50% complete does not mean that it has earned 50% of the value. Think of an open heart surgery and you'll get the idea. It is common to give more weight to completing a task than to just starting it or being half-way done.

Disclaimer: This spreadsheet and the information on this page is for illustrative and educational purposes only. We do not guarantee the results.