A Volatile Function in a spreadsheet is a function like RAND, TODAY, NOW or OFFSET that must be recalculated every time any cell is changed and every other time that Excel recalculates. At each recalculation, all volatile functions fire off and recalculate, setting up a chain reaction of recalculation of every cell that might depend on them. We had some fun creating the above image to demonstrate the effect of a volatile function. This is simplifying things quite a bit, but the point is that when a cell changes, every cell that refers to it must also be updated. So, volatile functions usually only cause performance issues if a lot of other cells depend on them.

There are some volatile functions like RAND, RANDBETWEEN, NOW, and TODAY that are obviously intended to cause a recalculation every time. But, you may not be aware that OFFSET and INDIRECT are also volatile functions, even though it might not seem necessary for them to recalculate. The functions INFO and CELL can also be volatile, depending on their arguments.

Why are OFFSET and INDIRECT Volatile Functions?

See the list of references at the end of this article if you want to learn more about how calculation works in Excel and how to optimize calculation speed.

But my computer is fast, so what's the big deal? 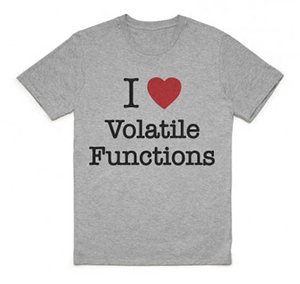 It might not be a big deal at all! Volatile functions are not inherently bad. I think they get a bad rap partly because they are called volatile - as if some explosion was about to go off in your spreadsheet. In fact, most of the volatile functions allow you to do so some amazingly awesome things!

I am a fan of volatile functions. If I actually had a shirt like the one my brother designed on the right, I would wear it. I love OFFSET. I love TODAY. I love INDIRECT. I love RAND. I love RANDBETWEEN. I hardly ever use NOW or INFO or CELL, but I bet if I used them more I would love them too.

The volatile function itself takes only a tiny fraction of a second to calculate, such as using TODAY to display the date at the top of your worksheet. So, you don't usually see problems until there are hundreds of thousands of calculations that depend on the result of the volatile function, or if you are using volatile functions in too many formulas.

Am I suggesting you fill your spreadsheet with volatile functions? Sure, if that would be cool and would allow you to do something awesome. But that's not my point. Use volatile formulas if you need them. If you run into speed problems, look for inefficiencies and fix them, but don't allow your fear of volatile functions or other people's fear prevent you from using them to do cool things with your spreadsheets.

Some Examples of Why I Love Volatile Functions

I love using TODAY in project schedules, invoices, purchase orders, and other forms and reports where you want to display the date that the form or report was printed.

Another fun use for TODAY is within conditional formatting rules to highlight the current date in a calendar.

You can either use a formula like =B11=TODAY() for the conditional formatting rule, or you can use the built-in rule shown in the image below. 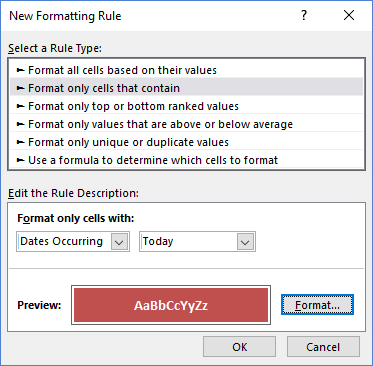 The RAND and RANDBETWEEN functions

Below are a couple of formulas for generating random numbers from specific distributions. See my Monte Carlo Simulation template for a larger variety of ways to generate random numbers for simulation models.

1. Generate a Random Number from a Uniform Distribution

2. Generate a Random Number from a Normal Distribution

Now for the fun: If you generate random rates of return, you can simulate the change in value of an investment over time. Pressing F9 makes the graph change. The animated GIF below shows what this can look like:

This example is included in the download file, and the technique is also used in my Savings Calculator and 401k Calculator.

I have already written about using OFFSET for dynamic drop-down lists, but I'll mention it again here because it's one of the main reasons I love OFFSET.

I like using OFFSET(current_cell,-1,0) to reference a cell immediately above the current one. This makes it possible to create running balances and running counts that are more robust to user actions such as sorting, deleting, inserting, or moving rows within the table.

The example below shows the result of deleting a row within a table that uses a running count and running balance. The formulas that use OFFSET don't result in #REF! errors.

NOTE This is an example of a very efficient use of OFFSET, but you can accomplish the same thing without a volatile function. You can define a relative named range like prevBalance (by using a relative reference of $I77 in the Refers To field) and use the formula =prevBalance+H78.

I use INDIRECT in some of my spreadsheets to create dependent drop-down lists. The details for how to do that can be found in my article "Create a Drop Down List in Excel".

2. Including the Worksheet Name in a Dynamic Reference

This is a technique commonly used in dashboard reports to summarize data from multiple worksheets that have a similar structure. The example below sums the sales in column B for the worksheets named Jan, Feb, Mar, and Apr.

If the worksheet name includes a space, then you need to enclose the name in apostrophes like this:

It's Not Always the Volatile Function's Fault

If you have a complex and inefficient spreadsheet, dependence on one or more volatile functions might be a cause for the slow calculation, but they aren't always the cause. Below are a couple examples of inefficient formulas that are NOT volatile:

Except in Excel Online, I have not come across a situation where using OFFSET or INDIRECT causes performance problems (i.e. slow calculation) when used for dynamic ranges in drop-down lists. When you select a value from a drop-down list, the cell stores it as a single value, not a formula. In theory, there is no need for the Source of a drop-down list to be included in the dependency tree. It only needs to be recalculated when the user accesses the drop-down.

The named range containing a volatile function may be recalculated after every change to the spreadsheet, but if you only have a few of these named ranges, and you only use them for drop-down lists, then no big deal.

To test this theory, I created a spreadsheet that used over 100,000 inefficient cumulative sum formulas of the type SUM(A$5:A400), resulting in about 300 million addition operations, all depending on each other in series, beginning with a single start cell. There was about a 5 second delay in calculation when the start cell was modified (even a 1 second delay in calculation gets annoying). I then added data validation drop-down lists to all 100k cells, each with a formula like =OFFSET(A6,0,0,RANDBETWEEN(1,50)) so that the drop-down lists were doubly volatile (OFFSET using RANDBETWEEN as an argument). These 100,000 drop-down lists did not noticeably affect the calculation speed at all. I suspect the reason is that the formula used for the Source in the drop-down list is not evaluated until you click on the drop-down (that would make sense after all).

Excel Online: There does appear to be a problem when using volatile functions for drop-down lists in Excel Online.

What do You Think?

If you have any strong opinions about volatile functions, or have any examples of ways that you use them to do cool things, please share by leaving a comment below.

To see some of the examples mentioned in this article, download the Excel file below.

There are a lot of great articles written by experts that provides tips for improving calculation efficiency in your spreadsheet models. Some of these are listed below.