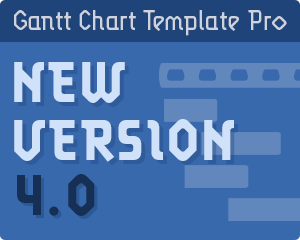 We've just released a new (beta) version of Gantt Chart Template Pro that is designed to be a lot easier to use. It is available to both new and current customers. Existing customers can return to the download page to get the new version (no new purchase necessary).

When I first created the Gantt chart template for Excel, my goal was simplicity and ease-of-use. Over time it became more complex as people requested new features, capabilities, and different ways to define task durations and dependencies. With the added features, keeping it easy-to-use became more difficult.

The goal for version 4.0 was to maintain functionality while making it both easy and intuitive to use. In other words, we wanted to return to the idea of "Gantt Charts Made Easy!" The two main changes have to do with making it easier to edit WBS numbering, and eliminating the need to copy/paste template rows for different ways of defining tasks durations and dependencies.

You don't need to understand how the formula works for the work breakdown structure (WBS) numbering (2.4, 3.1, 3.1.1, 3.1.2, etc.). All you need to do is select the WBS Level from a drop-down box. The WBS numbering is automatic. Also, the task descriptions are automatically indented based on the chosen WBS level. Unlike the free version (and older pro versions), you will not need to copy and paste different WBS formulas for different WBS levels.

For fellow Excel geeks: If you are curious about how the mega-formula for the WBS numbering works, you can learn some of the techniques via an article I wrote about various text manipulation formulas. Also, the indenting of the task description is controlled using Conditional Formatting and custom Number formats such as "_s_s_s_s@" to format the text with leading spaces.

The biggest change in version 4.0 has to do with how you define each task's start and end date. Instead of copying formulas from a set of template rows to define tasks in different ways, you just enter your data in the appropriate input columns.

Ultimately, a task needs to have a start date and an end date. You can arrive at those dates in a lot of different ways, depending on whether you want to enter dates manually, enter a duration instead of a date, or whether you want to create dependencies between tasks using Excel formulas.

In version 4.0, all you need to do is enter a combination of two inputs. For example, this could be the Start date and End date, or the Start date and number of Work Days. The start & end dates in columns M & N are calculated for you based upon what inputs you've entered. The screenshot below shows the possible combinations of input values for defining a task.

For each task, the green cells are inputs and everything else is calculated.

The downside to this new way of defining tasks is that there are a few more columns than there used to be (for example, a Start date column used as an input option in addition to the calculated Start date column). However, you can just hide the columns that you don't want to see.

Tip: In addition to hiding columns to condense the input section of the worksheet, you can use the Arial Narrow font and then make the columns narrower. That is what I did to create the above screenshot.

With Version 4.0, there is no longer a separate version for U.S., International, and U.K. customers. There is now just a Desktop-only version and a Desktop/Mobile/Online version.

The Desktop-only version uses some features of Excel that are not available in Excel Online such as cross-hatching formats, vertically oriented text, etc. The desktop version also uses more columns for the display of the bars to provide greater precision in the Weekly and Monthly views.

If you want to access and edit your Gantt chart online, via your mobile devices, and on your desktop, then use the Desktop/Mobile/Web version.

If you have questions about the new version, please comment below or email me.

Q. Why are there two sets of Start/End dates?

The green columns are inputs and the gray columns are calculated. The reason this is necessary is because Version 4.0 allows you to define a task using different sets of inputs (see above). The bars of the gantt chart use the calculated columns.

Q. Is there any reason to use the older version(s)?

I don't think so, unless you are using an old version of Excel, such as Excel 2008 or older.

No. The new version requires Excel 2010 or later. I've decided to stop updating the files for Excel 2003 and Excel 2007 because of the lack of features in those older versions of Excel. Customers can still download the gantt-chart.xls file which works in Excel 2003 or later, but it's no longer supported.

Q. Why is the Video demo still based on the older version?

It may take me a while to update all of the videos and help content on the website, but the new version is so much more intuitive that I wanted to make it available now rather than waiting until I can get a new video created.

Q. What happens if I enter more than two values to define task durations?

Avoid doing that. If you enter a Start Date and an End Date AND the number of Work Days, then you won't know which of the 3 values were used to calculate the Start and End dates used in the chart.

Q. Why isn't Predecessor and End Date included as a possible input combination?

That isn't a good way to define a task because if the project gets off schedule, the start date could end up being AFTER the end date, and that doesn't work. When using the Predecessor column, it makes more logical sense to use the Work Days or Calendar Days to define the duration.

The Help worksheet provides some examples of using custom formulas to define task dependencies. The Predecessor column is just for the most common type of dependency (a task starting after the predecessor task is done).

Q. What is happening when I enter End Date and Work Days as the inputs?

The Start date is calculated to be the number of work days PRIOR to the End date you entered. You might use this for a task that needs to start 5 days prior to the completion of some other task. The End date could be a simple Excel formula that references the end date of the other task.

Q. What are the little green triangles in some of the cells?

The green triangles are due to the "Error Checking" feature in Excel. Most of the time they aren't actually errors. They may be warnings such as "Number stored as text" or "Inconsistent Formula" or "Unprotected Formula," all of which may be intentional on the part of the user or template designer (such as the WBS numbering purposefully entered as text).

To get rid of the green triangles, you can either choose the "Ignore Error" option every time they show up, or you can go to "Error Checking Options" to turn off some of the various types of warnings.

Q. Will the BONUS files be updated, too?

Yes and no. I've updated the Google Sheets version, the 3 sample project schedules, and the Time-based gantt chart. The bonus files that are not based on the Gantt chart template (like the timeline template and the tips workbook) have not been changed.

56 comments… add one
Next Comments

Previous Post: Analyze Data with a Calendar Chart in Excel